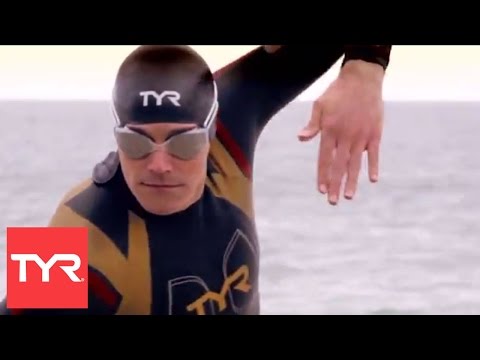 The pinnacle of wetsuit performance, the TYR Hurricane Freak of Nature women's wetsuit is constructed of 100 percent Yamamoto 40 Cell Neoprene.

Featuring remarkable stretch-and-return capacity, "The Freak" (as we affectionately call it), has been referred to as an "Engineering Marvel" by the triathlon industry and is incomparably soft and pliant.

Designed for speed in the water, the Hurricane Freak Of Nature showcases an arsenal of acceleration-driving, buoyancy-boosting and power-enhancing features.

Calculated, calibrated and repeatedly revised until we reached the absolute limit of Range Of Motion, the Freak Of Nature Wetsuit features a stunning 7X stretch factor.

There is no question that the FON will be the fastest wetsuit you have ever worn.

FON ELEVATION PANELS
The Elevation Panels on the Hurricane Freak of Nature are a game-changer. They instantly help the athlete establish perfect body position relative to the surface of the water. When Andy Potts tested the suit, he described the Elevation Panels as “otherworldly effective.”

FON QUICK RELEASE ANKLE CUFFS
Designed for triathletes from the ground up, the suit is designed to open, reverse and release with extreme ease and speed.

FON ROM ZONES
The gold bands on the back and shoulders of the Hurricane Freak of Nature delineate the expanded Range of Motion zones — calculated, calibrated, and repeatedly revised until we reached the absolute limit of positive range of motion. Combined with the stunning 7X stretch factor, there is no question this will be the fastest suit you’ve ever worn.

FON V-GCP
The Hurricane Freak of Nature is armed with our new V-GCP, ROM ZONES which flattens the forearm for the most advantageous engagement, maximizing your effort. You WILL FEEL noticeably more distance per stroke. The new Aquaman Rafale fullsleeve wetsuit black/blue men model is a real Triathlon Wetsuit. The rafale is the Model that many triathletes were waiting for to finally have the pleasure of swimming in AQUAMAN. This is the guaranty to benefit from all our know-how. This combination is true to the philosophy that has driven us since 1976: manufacture products of the highest quality, cut in the best neoprene and equipped with advanced and Innovative technology. It is made of Yamamoto neoprene and with strategically placed SCS coating for comfort and maximum glide. The BTTLNS Rapture 2.0 wetsuit is a step forward with its improved material, structure, fit, but above all with its technological progress. This fantastic entry-level model uses Yamamoto neoprene. This world leader in neoprene production guarantees excellent flexibility, comfort and freedom of movement. On both arms, shoulders and armpits it is groundbreakingly thin. The used 2 mm panels of Yamamoto #39 cell provide the best possible flexibility. The 5mm neoprene material on the lower body provides the necessary buoyancy; perfect for novice swimmers! The Rapture 2.0 uses an optimized V neck for improved pressure distribution and reduction of a 'sticky feeling'. With a price point of a mid-level suit, the 2XU R:3 represents exceptional value. The Orca Sonar full sleeve wetsuit men gets redesigned offering more buoyancy, flexibility and improved hydrodynamics to help you move smoothly and quickly through the pulse-pounding swim leg. The Sonar triathlon wetsuit features Yamamoto 39-Cell neoprene rubber for greater flexibility, suppleness, fit and comfort. The SCS (Super Composite Skin) coating reduces friction and increases speed through the water. While the unique InfinitySkin lining provides high-stretch and flexibility, so you can move freely and dynamically through your swim stroke.  Strategic use of Aerodrome-2 panels and SuperStretch lining improves buoyancy for a fast swim, saving you precious seconds in the water. Turn every swim into a race with the Orca men's Sonar Triathlon Wetsuit.

The BTTLNS Gods wetsuit Shield 1.0 is the leading wetsuit of the Sea Warfare collection that offers a perfect combination between flexibility and buoyancy! New developed Extreme-Stretch 100% neoprene ensures an ultimate fit and excellent flexibility in the shoulder panels. The wetsuit features complete new floating technologies, which will guarantee a very stable and balanced position in the water. Airdrome Float neoprene enures a unimaginable buoyancy withouth lifting the underlegs too much to reduce the loss of power... in short, everything has been considered! The Sailfish Ignite fullsleeve wetsuit with balanced buoyancy, generous freedom of movement and good visibility will not only inspire you. The Ignite from Sailfish is ideal for a wide range of applications from long open water sessions to the occasional triathlon. Through a careful selection of materials: supple, surface coated SCS #39 neoprene and durability, these offer you excellent buoyancy and low resistance friction. In addition, the "long life" neoprene provides little wear and tear and good visibility. The inside of the wetsuit features a flexible soft stretch inner lining for maximum comfort. This significantly reduces shoulder and arm fatigue, which is a nice feature for beginners. Thanks to the "ergo fit", the fit is perfect and the new flat like prevents chafing and provides a good seal around the neck. And the low resistance panel increases swimming efficiency. Putting on a wetsuit has never been easier before the arrival of the Ignite.